From All Birds Wiki
Jump to navigation Jump to search
For the group of Southern Asian birds formerly known as honeyeaters, see Sunbird or specific members such as the Purple sunbird.

The honeyeaters are a large and diverse family of small to medium sized birds most common in Australia and New Guinea, but also found in New Zealand, the Pacific islands as far east as Samoa and Tonga, and the islands to the north and west of New Guinea known as Wallacea. Bali, on the other side of the Wallace Line, has a single species.

Honeyeaters and the Australian chats make up the family Meliphagidae. In total there are 182 species in 42 genera, roughly half of them native to Australia, many of the remainder occupying New Guinea. With their closest relatives, the Maluridae (Australian fairy-wrens), Pardalotidae (pardalotes), and Acanthizidae (thornbills, Australian warblers, scrubwrens, etc.) they comprise the superfamily Meliphagoidea and originated early in the evolutionary history of the oscine passerine radiation.[4]

Although honeyeaters look and behave very much like other nectar-feeding passerines around the world (such as the sunbirds and flowerpeckers), they are unrelated, and the similarities are the consequence of convergent evolution.

The extent of the evolutionary partnership between honeyeaters and Australasian flowering plants is unknown, but probably substantial. A great many Australian plants are fertilised by honeyeaters, particularly the Proteaceae, Myrtaceae, and Epacridaceae. It is known that the honeyeaters are important in New Zealand as well, and assumed that the same applies in other areas. 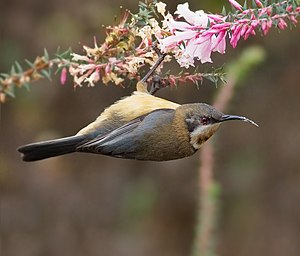 Unlike the hummingbirds of America, honeyeaters do not have extensive adaptations for hovering flight, though smaller members of the family do hover hummingbird-style to collect nectar from time to time. In general, honeyeaters prefer to flit quickly from perch to perch in the outer foliage, stretching up or sideways or hanging upside down at need. Many genera have a highly developed brush-tipped tongue, longer in some species than others, frayed and fringed with bristles which soak up liquids readily. The tongue is flicked rapidly and repeatedly into a flower, the upper mandible then compressing any liquid out when the bill is closed. These birds are one of only a few birds in the world that can fly backwards. This is because of their special wings.

In addition to nectar, all or nearly all honeyeaters take insects and other small creatures, usually by hawking, sometimes by gleaning. A few of the larger species, notably the White-eared Honeyeater, and the Strong-billed Honeyeater of Tasmania, probe under bark for insects and other morsels. Many species supplement their diets with a little fruit, and a small number eat considerable amounts of fruit,[5] particularly in tropical rainforests and, oddly, in semi-arid scrubland. The Painted Honeyeater is a mistletoe specialist. Most, however, exist on a diet of nectar supplemented by varying quantities of insects. In general, the honeyeaters with long, fine bills are more nectarivorous, the shorter-billed species less so, but even specialised nectar eaters like the spinebills take extra insects to add protein to their diet when they are breeding.

The movements of honeyeaters are poorly understood. Most are at least partially mobile but many movements seem to be local, possibly between favourite haunts as the conditions change. Fluctuations in local abundance are common, but the small number of definitely migratory honeyeater species aside, the reasons are yet to be discovered. Many follow the flowering of favourite food plants. Arid zone species appear to travel further and less predictably than those of the more fertile areas. It seems probable that no single explanation will emerge: the general rule for honeyeater movements is that there is no general rule.

The Wattled Smoky Honeyeater (Melipotes carolae), described in 2007, has been discovered in December 2005 in the Foja Mountains of Papua, Indonesia.[1]

In 2008, a study that included molecular phylogenetic analysis of museum specimens in the genera Moho and Chaetoptila, both extinct genera endemic to the Hawaiian islands, argued that these five species were not members of the Meliphagidae and instead belong to their own distinct family, the Mohoidae.[8]

Retrieved from "https://allbirdswiki.miraheze.org/w/index.php?title=Honeyeater&oldid=7149"
Categories:
Cookies help us deliver our services. By using our services, you agree to our use of cookies.